Last summer I spent a bit of time in Charlotte, North Carolina, and liked it enough to want to return. Since an unnamed airline was begging me to use my frequent flyer miles I decided to book a freebie and look around a little more.

First off, this place was COLD! The temperatures plunged into the 20s and 30s, and it was breezy. Something about it was different than New England cold. A very nice airport shuttle driver suggested that it could be because the usual humidity was mixing with a Canadian cold front. I found it more unbearable than the cold at home. Because of this unexpected weather glitch I changed my original plans to walk at least ten miles a day. I still did over twenty miles, but had some breaks to enter warm places!

I didn’t expect to go to the Billy Graham Library, but I went, and it was beautiful and interesting:

Yes, I had to go through the motions of being urged to “join the crusade,” but I didn’t find the employees pushy, and the films shown of Billy Graham’s life were very engaging. Several rooms dedicated to his story followed. I also visited his childhood home, which was moved there from another location. Billy, by the way, is 99 years old now. The library is free to visitors, and is the number one tourist attraction in Charlotte.

Downtown is a great area, new and sparkly, and a nice place to walk around:

Downtown reminded me a lot of Boston. I went twice, walking once, which I wouldn’t suggest, because the outskirts of Charlotte aren’t really very pleasant, (at least not the ones I walked through!) and sidewalks can be hard to come by. The Lynx Blue Line train was a much better choice, and cheaper than a taxi. It was under $5 for a round trip ticket.

My second day in downtown I visited the NASCAR Hall of Fame, another thing I didn’t expect to do! Here’s me in Jimmie Johnson’s car: 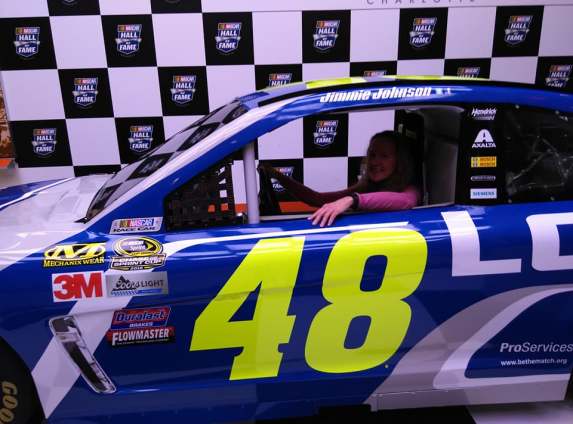 Well, not really his car! It was actually only half a car, for photo purposes! The cost to get into the Hall is $25. I’m not a race fan, but I like learning new things, and there’s a lot to learn here about the history of NASCAR, the cars, and the drivers. For instance, did you know the earliest drivers were actually moonshine runners?

At night I read through the book I plan to publish in April, and to outline the book I’m writing now! A fun and productive weekend all around.