Back in March I did my first Patagonia post. Here’s the second in a three-parter.

You’ve arrived in Buenos Aires, Argentina, and are eagerly awaiting your Patagonian adventure. Maybe your first “hop” is El Calafate. Here’s what to expect.

El Calafate, a three hour flight from Buenos Aires, is a jump off point for day trips to Lago Argentino, Perito Moreno Glacier (in Parque Nacional Los Glaciares) and Parque Nacional Torres del Paine, amongst other destinations. These were the three choices of my travel companions and I, and may be yours, so for the sake of space, I’ll concentrate on them.

Before I go any further, however, let me say this: if you’re a hiker like I am, this would presumably be your fantasy destination. After visiting I have to admit that I’m not heavy duty enough to spend that much time battling the elements of Patagonia on foot. I visited in the dead of summer. The days trips we took offered chances for short, informative hikes, and that was satisfying enough for me. The closer to a getaway vehicle, the better for when the unpredictable weather decides to take a turn for the worse…or much worse, which can happen pretty darn quick. Also, keep in mind that the road conditions can be horrendous at best, so if you have the idea of renting a car, just be well prepared. At the very least, know how to change a flat. We saw several drivers dealing with them., and you may be miles and miles from any kind of assistance.

Flying into El Calafate gives you a good idea just how remote this landscape is.

Then, the town appears and a really big plane lands at a really small airport.

Tour operator Patagonia Dreams has an office at the Comandante Armando Tola International Airport in El Calafate. Too early to check in, we stopped by and booked all our trips the morning we landed. Please note that the website quotes prices in Argentinian pesos (ARS). Divide the price by the going rate for the day, somewhere between 37 and 39 ARS to US dollars. The trips book up quickly, so do it as soon as you can. We lucked out and were able to get on the three tours we wanted, starting that evening.

We checked into our very cozy hotel picked by Tripmasters. No complaints whatsoever about their choices. You have the option of changing what they pick. We didn’t and were very happy in all three destinations.

El Calafate is a boom town with an ample amount of restaurants and the same rugged feel of, say, Fairbanks, Alaska. Middle of nowhere aspect aside, I managed to score a gluten free pizza and a meeting with Pennywise at MAKO fuegos y vinos. In Patagonia. Go figure. Just one of those days that will stay with me forever, you know? 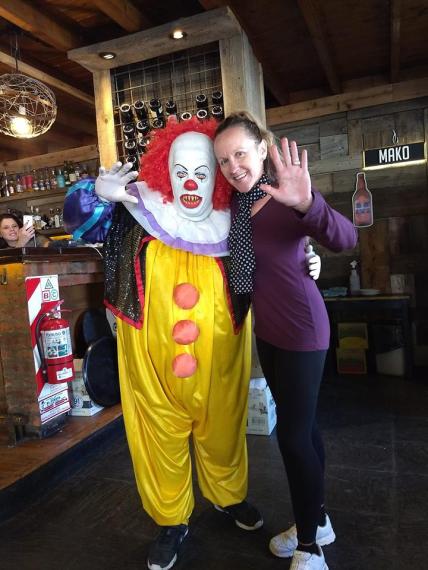 Later that afternoon we were picked up at our hotel for our first excursion, across the Patagonian steppe to the banks of Lago Argentino. Just a quick note on pick-ups: none were on time. They were either late or early. This seemed to be true all over Argentina. I suggest to be ready ahead of time, and be prepared to wait. Roll with it. Like with anything you have no real control over. Getting crochety isn’t going to get you far, and hey, there are enough Ugly American stories out there. Don’t be one of them. Please?

This tour included a short hike on a picturesque trail along the edge of the enormous body of water, and a hearth-made meal in a cave as the sun set on the opposite side of the lake.

A great start to our Patagonian experience!

The following day we started out early on a tour to Parque Nacional Los Glaciares, home of the world famous Perito Moreno glacier, a massive chunk of jagged ice that’s nearly the color of the sky even on gray days and, unlike most glaciers, is growing instead of receding. Buses evidently run between here and El Calafate for a cheaper price than the tour, but I recommend spending the extra money (which isn’t that much, all things considered.) And if you’re in reasonably good health, don’t even think of missing the chance to hike on a glacier, crampons provided and incredible pictures guaranteed. This is a must-do experience to add to your “special day” file.

This tour includes a (frigid!) boat ride across Lago Viedmo. Expect to be on the road a total of about eight or nine hours to see the glacier, have lunch, and do the two hour glacier hike.

Speaking of world fame, Parque Nacional Torres Del Paine makes all those “world’s best national parks” lists, and the entry is well deserved. But just the trip from El Calafate was one of my favorite ever life experiences. If you’re booking through Patagonia Dreams, ask for Sylvester as your guide and Alejandro as your driver. (They aren’t paying me to say this.) Your guide will pick you up at your hotel in a normal-looking vehicle and transfer you to this monster, that I nicknamed The Beast:

It’s a Mercedes! No idea what kind, couldn’t find it online. What I do know is that when other drivers saw us flying along the dirt back roads to Torres Del Paine they moved over! Sylvester and Alejandro treated us to an impromptu safari that included guanacos, rhea, and South Andean deer.

Keep in mind that if you’re coming from Argentina you will need your passport to cross into Chile. You’ll complete the long but incredible day with four new stamps, two from Chile, two from Argentina. In between you’ll view the famed triple-horned Cuernos del Paine and fall in love with stunning lakes and waterfalls.

Weather permitting, a short hike to Salto Grande Lookout to view the spectacular falls of the same name is also a possible. This is the last stop before heading back to El Calafate, about three hours away, including the time it takes to recross borders.

Whew! What a three days! I’m exhausted just remembering it!

Next stop: Ushuaia, also known as “The End of the Earth.”

Until then, start making that Patagonia dream come true!