Jeez, I’m obviously not very good at keeping up with this autobiography stuff. Only two posts all year! Last time I promised that I wasn’t going to take so long to get to the next installment in my life story, a promise that I wasn’t able to keep.  But now that my blog is the focus of my writing life, I may just do better!

At any rate, in case you want to read the first two chapters in the life of me, here’s the story of my first ten years, and here’s the post about my teenage years after losing my beloved Dad.

And now, to continue…

So there I was, with two new loves, writing and maps, but with a family shattered by the death of my dad. My interests didn’t stop me from heading down some wrong paths for a few years, even as I obsessed over road atlases my mom would buy me and created wild stories in my head and on paper about characters who traveled, fell in love, and were a heck of a lot happier than me.  At a very young age I found temporary infatuations with drinking, smoking, and being a pothead. I’m not sorry about doing any of those things, because by the time I was eighteen I didn’t care about any of that anymore, but did care about my stories and my Rand McNally’s. Back then I didn’t think I had any chance to travel or live a life even close to the stories I was writing. As it turns out, I was wrong.

Like a lot of people, my travels started out in the obvious place: Disney World, of course! I was fifteen, it was 1982, and Epcot was just opening. My mom scrounged up enough money for us to go together. It was my first flight, and we also went to Sea World, Cypress Gardens, and Busch Gardens, on a guided tour. The travel bug was planted! I have my mother to thank for that. Here’s a real oldie of me from that trip, at Cypress Gardens. I was really in my Ugly Duckling phase in ’82! 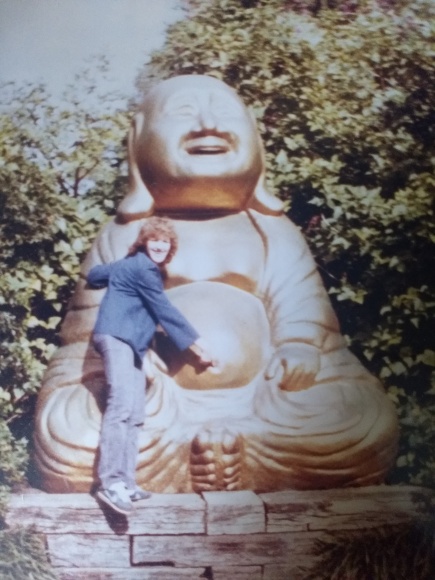 Florida was a dream, but to me the real prize was getting to California. It didn’t happen for five years after Florida, though we took some smaller trips. Between 1982 and 1992, Mom and I also made it to Amish Country, Washington, DC, New Orleans for Mardi Gras, Nova Scotia, Hawaii, Bermuda, Niagara Falls and Atlantic City, New Jersey. Not a bad take for two ladies who had really never been anywhere! I’ve included a picture from each trip. I have to stress here, too, that this wasn’t all about me, it was about Mom, too. Traveling was a new beginning for her. Not an easy or quick one, but eventually a welcome escape from the black hole her life seemed to be without Dad. She always said that Dad would have been behind her decision to take me places. I’ll just bet he would have been pleased to know that she was finally starting to get some satisfaction out of life again. 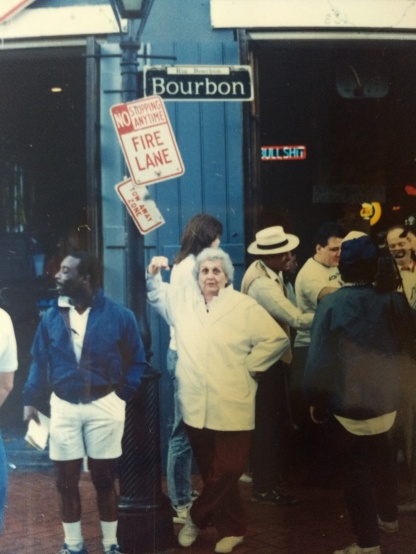 Mom never forgot her first and only love. But I fully believe she was finally able to let go of him more after fifteen years, ten years of which we were going places together.

I held down a full-time position in a local factory during most of these years. Our travel schedule wasn’t too wild yet, so I was able to squeeze the trips into paid vacations. That would get trickier as our travels got more sophisticated…and personalized.

While Mom and I were bonding ever closer and getting better at the travel thing, relations in our family were falling apart. Assumptions of favoritism were rampant, resentments cropped up that my sister, who is disabled, had to be taken care of while Mom was gone. Money problems were always at the forefront of every conflict. Things didn’t get any better, though everyone said they wanted Mom to enjoy life. In fact, things got steadily worse. I used to say that we weren’t a dysfunctional family, because that would indicate we were functioning, just not the right way. Hardly the case with us; we weren’t functioning at all. Because of this, Mom and I could never be completely happy traveling. She was filled with guilt for leaving her daughter, who required total care, in the hands of someone else, when she had always provided for her. Being far away from home without the option to get back quickly was tough for her. Sometimes she would cry and worry. My job was to cheer her up. It didn’t always work, but we still had plenty of good times.

We didn’t give up. Soon, traveling would get even more interesting. We’d leave the guided tours behind and start making our own fun.

That’s when I learned how to read those maps I was obsessing over. The United States and Canada were soon to be our oyster!